The title of this book brings back those fun-filled days spiritedly running through the meadows of blooming creativity and imagination, brimming with childish naivety and a profound love for the new and exciting. That’s right, there’s something charming in the foolish thought of exclusivity in a child’s wanderings- I had, at the raw age of 6 (or 7, or 8, I wouldn’t know, but it doesn’t quite matter) imagined inventing a machine and turning back time so I could have all the time in the world to play with my toys, to avoid bedtime and the incessant nagging of duty callings of homework and other responsibilities. At the time I had imagined that I was the only person in the world who was privy to the delights of imagining time machines, little did I know that it was a fervently discussed topic and even the subject of a book!

This book did my childhood memories justice; it was scientific and yet fantastical- at times cheery, at times dark- but all the while incredibly intriguing and a satisfying read. 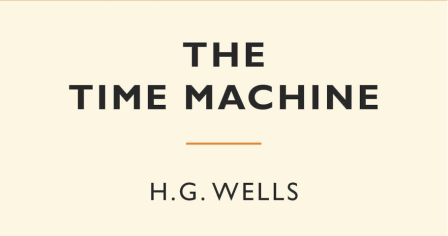 Such a simplistic, straightforward title and yet such an alluring one.

In the Time Traveller’s view, Time is simply a fourth dimension that is just as easily traversable as the other three dimensions of Space. It’s on this pretext that the Time Traveller believes that moving through time is possible with the aid of a machine, and serves as a basis for the rest of the story.

The vast chunk of the story is about his travels eight hundred thousand years into the future, and the odd encounters with the Eloi and the Morlocks, both evolved and transformed descendants of the human species. Although they are a race with short-lived attention spans and limited intelligence, the Time Traveller forms a special bond with Weena, one of the Eloi.

At first he attributes the low intelligence and seemingly idyllic way of life of the Eloi to be the result of humanity conquering Nature with technology, with no need to worry about survival (surprisingly a form of communism- something that raises perjorative connotations but we have to remember that communism starts with good intentions: ‘the road to hell is paved with good intentions’). Then he finds out about the subterranean Morlocks and speculates that the human species evolved into two kinds: the ‘lower-class’ Morlocks supply the Eloi with everything they need. However he eventually realizes that the Morlocks feed the Eloi and raise them like cattle; they’re bred like pigs for eventual consumption.

The Time Traveller’s assumptions nearly lost him his life; perhaps H.G. Wells was trying to convey the danger of wrong judgement. It was interesting watching the Time Traveller’s thought process and his adaptation to a new environment; and rather refreshing.

One interesting sidenote: I noticed that there were no first names used for the men who convened at the beginning and the end at the book to listen to the Time Traveller’s story. It was as if they were all defined by their professions. What does it mean? What is it’s purpose? Perhaps it reflects the rigid system and lack of acceptance for the new in that time. They all scorn the idea of a time machine even as the very proof of its existence lies before their eyes. Perhaps it coud be some sort of laughable experimentation on Wells’ part- the men and their words are not easily distinguishable besides from the label of their profession; it goes to show that even in this day and age men are losing their individuality for conformity. Or maybe it’s just for ease of reference. Afterall it takes time to be acquainted with a name.

Okay, so compared to Farenheit 451 and Time Must Have a Stop, this is only a trifle. But perhaps it’s a matter of personal taste, and given the fact that I picked this up at only 3 dollars from a sale at Prologue these two hours of delightful entertainment couldn’t have come cheaper. (fellow Singaporeans, top floor of Ion, now! Also do try the peach soda at the cafe there. So good.)

(I have yet to give a bad report on this blog! Oh well, I hope there isn’t a first)