The only real stumbling block is fear of failure. In cooking you’ve got to have a what-the-hell attitude. – Julia Child

The kaleidoscopic array of colors arranged so stunningly in an amalgamation of lettuce leaves, carrot strips, cucumber bunches, crisp basil and petite onions sat alluringly in the center of the table. Dinner plates from the night before had been swept away, and in their places, metallic makeshift stoves and wooden chopping boards were set up.

It didn’t quite matter – my tingling taste buds and itching hands were poised and ready to take on any challenge the cook was going to throw at us. A true culinary showdown. (Not really, that’s just my competitive side taking over).

First up, fresh spring rolls. I’ve always loved spring rolls (the deep fried ones had always been a guilty pleasure of mine, until a terrible mishap at a school camp involving copious amounts of yogurt and a hidden spring roll killed any love I had for them- but that’s another story). The crisp, just-picked-from-the-garden crunch of lettuce and basil leaves a fresh taste in your mouth, perfectly paired with a tart sugary-oyster-lemon-garlic-vinaigrette-esque drizzle for panache. It’s surprisingly simple to make- just chop up some cucumbers, shred some carrots, throw in some lettuce, basil, and a few leaves of coriander, line with prawns – and you’re good to go. Of course, what gave it its finishing flair was the delightful drizzle of sauce and sprinkle of peanuts on top. 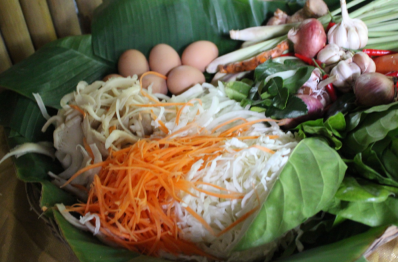 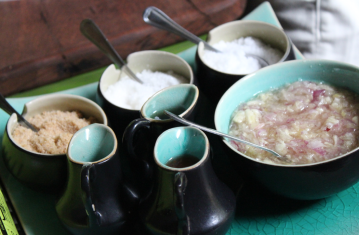 Next was the amok fish curry. I was never a huge fan of curry; spicy food was never my domain. But since I was cooking my own this time, I steered clear of the strikingly red chillies (in the hope that the chef wouldn’t catch me hiding my share in the vegetable spread adjacent to mine). A few dollops of amok paste, a torrent of veggies, all drowned in a terrifying downpour of coconut milk, simmered and stirred with aching arms. The fish were simmering in the wok for well over twenty minutes, giving the plump morsels their tender, succulent texture. A little taste of the curry, and more coconut milk was added. Another pinky dip, more amok paste. Wait, more milk. It was a never-ending cycle (in the end I probably wound up with an entire can of coconut milk in there).

And then the chef waddled over for a little taste of my curry, and my heart skipped a beat (hoping he wouldn’t declare it inedible). ‘Hmm, too salty- and not spicy!‘ I guess curry without the spice is sort of like lava cake without the chocolate; but oh well – to each their own? The chef’s cheery grin made me feel a lot better about myself and my curry.

Last but not least, we whipped together a Khmer banana pudding. Calling it pudding would be a vast misstatement – the name is incredibly misleading. Coconut and banana soup, yes – but pudding? Far from it. It was a soupy concoction of watered down coconut milk and tart banana, scooped in generous, heart-stopping amounts into a coconut shell. Something akin to my favorite mango pomelo sago; except this time with coconuts and bananas, with a scattering of green beans amongst the sago.

Not entirely my definition of dessert, but hey, we came to Cambodia to challenge ourselves – never hurts to try something new, eh?